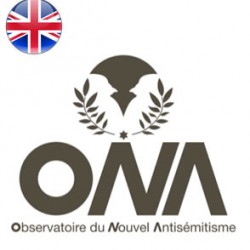 The controversy surrounding the nature of Dieudonné’s speech exposes once more the challenges of acknowledging and defining Anti-Semitism in its contemporary form.

When can we consider that Dieudonné is making Anti-Semitic statements? Is it merely a matter of a few reprehensible comments, or is each performance an expression of Anti-Semitic ideology? Is the fact that he targets only Zionist Jews enough to spare him from all condemnations?

In order to avoid linguistic traps, let us try to define the ideas that have characterized Anti-Semitism throughout time.

When juxtaposing these two ideas, you could summarize the Anti-Semitic dogma with the following formula: “Jews lie in order to rule over other people; they are immoral and represent a danger to mankind.”
This is exactly the idea that Dieudonné develops with his audience, with one difference: the explicit target is not the “Jew” but the “Zionist.”

This study aims to highlight the main ideas channeled by Dieudonné, using only the content of performances or in videos uploaded on the Internet. (I)

As an example, we have compared his statements to those made by Hitler in his book Mein Kampf. (II)

I- Dieudonné’s message in six points

1- Zionism controls France and wants to control the world

Example #1 – Holocaust blackmail: the Holocaust is a Zionist creation

5.1- Christians and Muslims must unite to fight Zionism

5.2- The Iranian model: Christians should join revolutionary Islam that was initiated by imam Khomeini 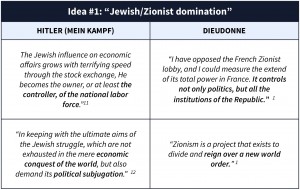 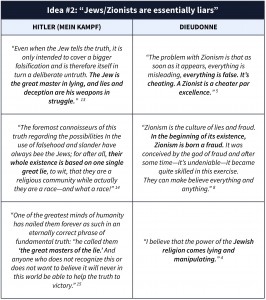 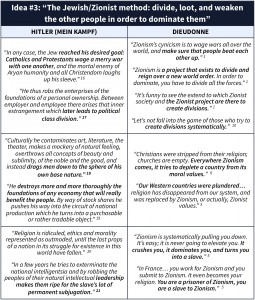 Is the “quenelle” a gesture against the establishment?

Probably, but for those who oppose a system that is, in their minds, dominated by Zionist Jews and their “slaves.”

Is the “quenelle” an inverted Nazi salute?

The main similarity between the quenelle and the Nazi salute is probably its function. The quenelle popularizes and summarizes in one gesture an ideology advocates that the world has become unjust because of a Jewish Zionist elite that seized power through lies and manipulation.

The most dangerous aspect in the ideology preached by Dieudonné is the redemptive nature granted to the fight against Zionism. Redemption could only be attained after liberating our societies from the “Jewish Zionist yoke.” This echoes the “redemptive” anti-Semitism that is at the core of Nazi doctrine.

Is Dieudonné a comedian who wants to make people laugh, or fight the “Jewish Zionist rule”? What is he fighting for?

If we let him speak, we’ll know.